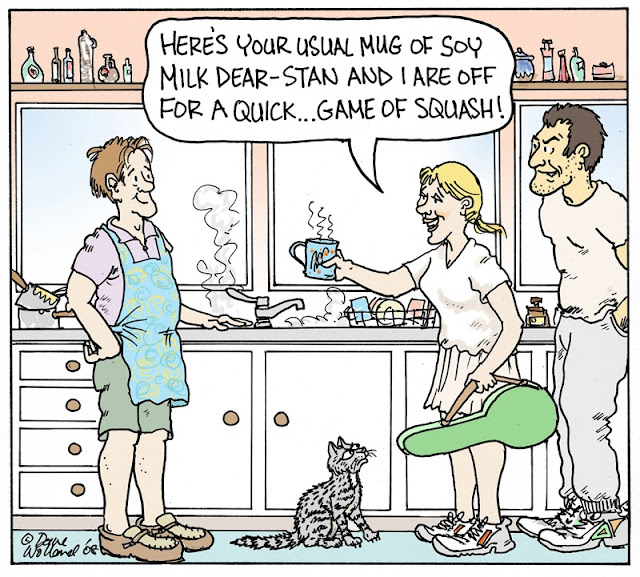 I can remember my mother often saying to me, “A little knowledge is a dangerous thing David.” Which is probably why she played it safe and seemed to blissfully know very little at all about the world. Her main concerns appeared to me to be; a spik-and-span house, enough food on the table and plenty of home baked cakes and biscuits stored in tins.
In a way, even tho’ I miss her, I am glad she is not alive to see the arrival of home computers and the tidal wave of information that is sweeping the World. I am sure my mother thought all kinds of food could be eaten as long as you liked them and they were not too spicy. However, we know these days, that many of these really delicious foods are unfortunately tainted by what scientists know about them.
A good example is the controversy surrounding the consumption of soya bean products. I have been talking to Dick James recently and he has really put the wind up me. Dick breeds caged birds and lives out at Mcleods Bay (Whangarei Heads).  He got involved in the campaign to ban soy milk for infants and children after he noticed his prize winning parrots karked it after eating bird seed “contaminated” with soya beans.
According to him, the soya bean in any form can be dangerous due its high levels of estrogen and he referred me to a very interesting websbite – (soyonlineservice.co.nz). His concern is that soya products are so common now in processed food that it almost impossible to avoid eating them.
So what is so dangerous about estrogen? Apparently, it is a powerful hormone that can lead to deformities and cancer if women eat too much of it. In men, estrogen affects masculinity by lowering testosterone levels and interfering with the process of boys growing naturally into  ‘normal’ men.
Food is not the only source of hormone affecting chemicals. Many newly manufactured plastics also give off toxic fumes and friends of mine refuse to store food in plastic wrap and avoid using plastic crockery. As a potter, I heartily agree with this idea. In my humble and totally biased opinion, there is nothing that can match drinking coffee or tea from a well made, hand thrown pottery mug!
The plastic interior of cars also can give off fumes especially when new and left outside to heat up in the sun. When my car was much newer I left the windows open, whenever possible, to vent any unwanted gases. These days I do the same but more often to cope with the unfortunate consequences of accidentally locking my semi neutered tomcat inside the car overnight.
For many of us middle aged males, this advice about avoiding environmental estrogens might have come a bit too late in the day. Way back in the days when “The Sensitive New Age Man” was fashionable and politically correct, little did we know the sinister influence our food and lifestyle was having on us. There we were, thinking we were nobly suppressing our naturally aggressive instincts, when all along we might have been unconsciously been affected by chemicals mucking around with our hormones.
Still, the news might not be all that bad. The Green Party’s co-leader, Jeanette Fitzsimmons, has claimed that the Waikato River is so polluted with estrogens (amongst a noxious group of other chemicals) that Aucklanders should think twice about using it as their water supply.
I would expect that most men in that city would probably ignore this warning. With this in mind, I wonder if we might in time see more docile driving habits from beardless, breasty men stuck in daily traffic jams on the motorway and Auckland streets.
Jokes about women drivers could well be replaced by new humorous comments on being a jaffa man.
Jaffa….? “Just Another Feminine Fellow Aucklander!”
Posted by Dave Wolland at 2:04 PM No comments: 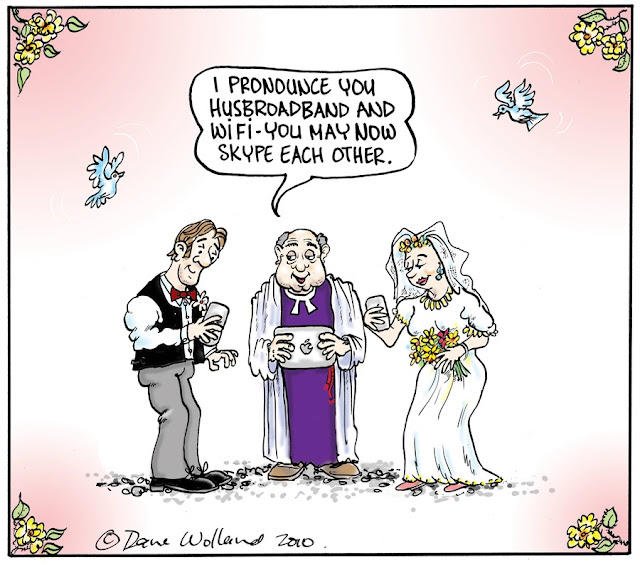 The word wi-fi has a catchy ring to it. It sounds modern in the same way hi-fi did in nineteen sixties. Wi-fi might have begun as a company slogan, but we now use it to label much of the wireless technology that is connecting people all over the globe. The days of being “wired up” with copper seem to be coming to an end.

There are however, some people who believe that we might be slowly drowning in a cesspool of electronic pollution that gives us cancer, genetic defects, nerve injuries and undesirable behaviour. They appear to the same people who say we humans have a nasty habit of wrecking our environment for economic gain. We then find ourselves being forced later on to spend huge sums cleaning up air quality, poisoned rivers and restoring the wildlife.

To be honest, I did not give this matter much thought until I began experiencing headaches while using my wireless phone. As soon as I went back to using my old phone the headaches disappeared. For that reason I have not been very enthusiastic about using wireless devices around the house.

I then had another unsettling experience when a friend called in and wanted to show me some pictures of her attending music festivals in Britain. I sat beside her and soon felt a burning sensation in my thigh. I looked down and noticed a router hanging down from her laptop computer. I was not even touching it and so that gave me another reason to be cautious about using wireless technology.

When I checked out on the Internet if other people were having similar misgivings about wi-fi, I found plenty of scary facts, statistics and personal stories. If you took it all in as gospel, then you might not get a good night’s sleep until you lived in the country and kept all wi-fi devices out of your house. Alas, even there satellites are beaming down Sky TV signals twenty-four hours a day.

On the other side of the fence, there are just as many people who rubbish the arguments against wi-fi – after all, our hospitals are not exactly overloaded with wi-fi afflicted patients. Even the World Health Organization (WHO) has issued assurances that wi-fi is generally safe, so why worry?

Because of my own experiences, I will be playing it safe. Wi-fi radiation might not be harmful in small doses, but the affects of constant exposure have yet to be firmly established in my mind as 100% safe. I also suggest that it might be a good idea for pregnant women and children to stay clear of wi-fi transmitting devices as much as possible. It takes time to effectively understand just how risky new technology is and I think our children are too precious to be experimental guinea pigs.
Click On Cartoon To enlarge


Posted by Dave Wolland at 4:45 PM No comments: Did your parents make you eat your crusts? Mine did and often reminded me that there were millions of starving people in world that would be grateful to have such food. I suggested once that we post mine to them, but that went down like a lead balloon and my father said something like, “Come on Dai, eat them up, they’ll put hairs on your chest.”

Now that was a more compelling incentive for a young boy, but I did notice that my crust eating older sister did not have hairs sprouting out of her cleavage. For quite a few years I suspected that she secretly shaved them off like she did with the hairs on her legs.

When it came to raising my own children, I encountered the same resistance to crust eating and it did not worry me. For all I cared, the chooks could have any leftovers. My wife however, had a few sharp words to say about this, because she thought that it was wasteful and impolite to leave crusts on your plate. My attitude was coloured by reading books on nutrition that said; when children are given the opportunity, they will usually chose what is naturally good for them.

I knew that the radiated crust of a loaf was not as nutritious as the rest and so I was not surprised to learn, in a 2002 news item, that a research project on crusts had revealed that they had high levels of acrylamide. This is a chemical that is thought to be carcinogenic and is found in dangerously high levels in foods that are roasted, fried and baked. It can also be found in products such as coffee, some plastics and cigarette smoke.

This might well explain how cancer can strike individuals who seem to lead a healthy lifestyle. Radiation and frying changes organic molecules in a very unnatural way and most of us know that bread jammed in the toaster eventually turns to carbon, which is indigestible.

Our ancestors have of course eaten roasted and fried food for thousands of years and survived better than the raw food enthusiasts, who were probably exposed to more pathogenic bacteria and parasites. These dangers can be dealt with now by other means and in the U.S.A., the conservative FDA (Food and Drug Administration) has issued warnings about eating acrylamide rich foods such as chips, biscuits, roasts and fries etc.

The Processed Food industries quickly resisted these findings and raised a political storm that forced the FDA to do further research before coming to conclusions that would affect their revenues. That research is ongoing and its findings have received very little publicity. You can google the site and watch the progress. Results so far have indeed confirmed the presence and dangers of acylamide in our Western diet.

In the future, does this mean that we will no longer smell the seductive aroma of coffee and toast in the morning if we want to stay healthy? Will visits to a bakery be a fond and distant memory like lighting up a cigar or puffing away on a favourite pipe?

Fear not crust addicts! There has been a counter attack using so called new research to confuse us. A study, presented in the European Journal of Cancer Research, suggests that there is an anti-cancer chemical (pronyl-lysine) in bread crusts that might reduce the high levels of colon cancer. Genetically engineered fungus is also getting into the act and its creators claim that it will block the action of acrylamides in fried and roasted foods. However, these research findings could well have the finger prints on them from the processed food industries and should perhaps be treated with caution.

So, do I eat my crusts? Not on your Nelly. I will stick with the Government funded FDA findings and other cancer avoiding diet guidelines. Somehow I intuitively knew about the dangers long ago when I picked up warm fresh bread from our local dairy in the morning. On my way home, I would break the seam in the middle of the loaf and pluck out the bread from one of the two parts  - leaving a hollow, unwanted crust behind.
Click on the cartoon to enlarge the image 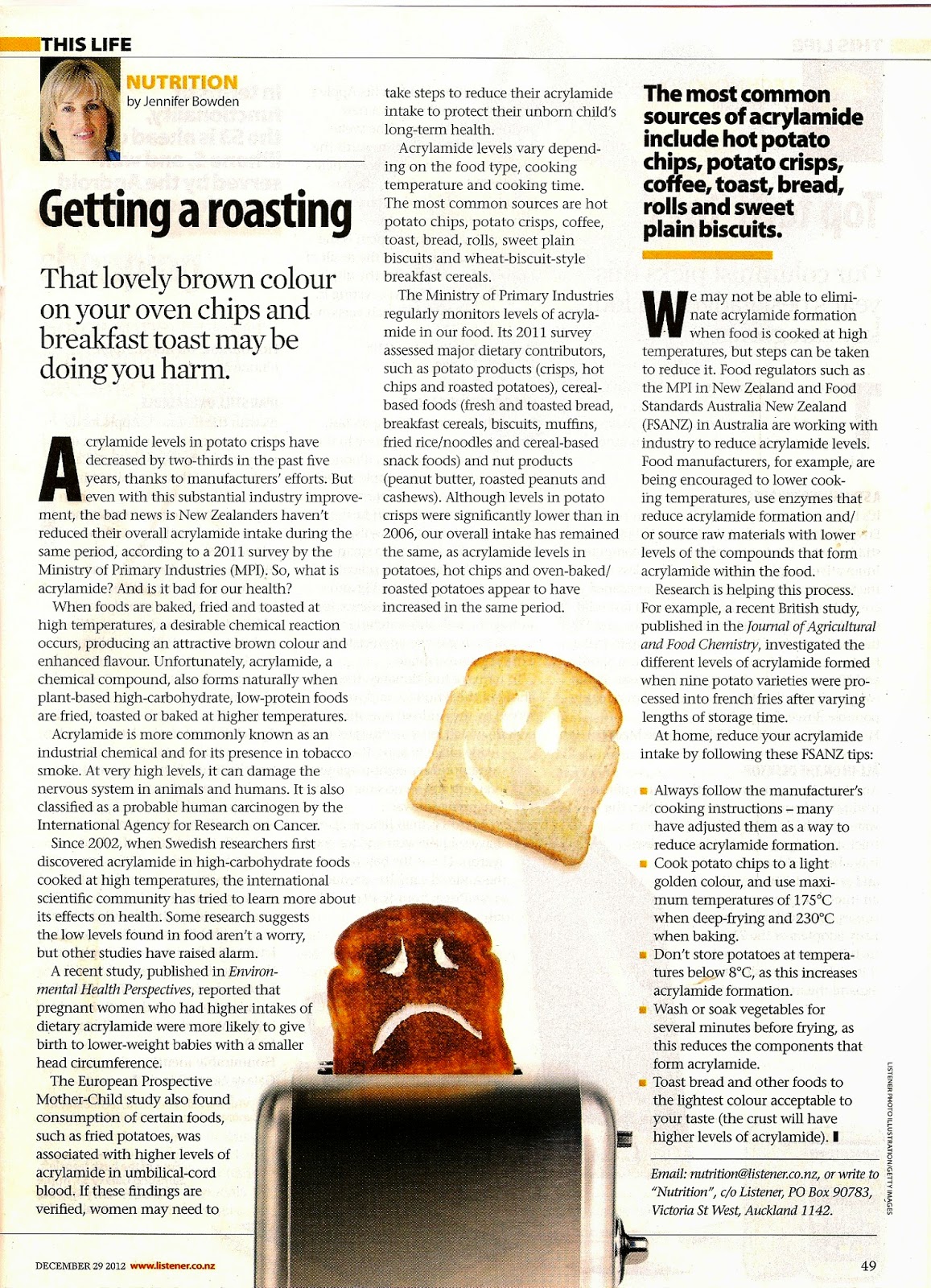 Posted by Dave Wolland at 4:37 PM No comments:

Dave Wolland
I have created a collection of blogs to provide a window on my own work and ideas. You can contact about me these and any other matter at dave.wolland@gmail.com - your comments on each posting are very welcome too. My contact phone number is NZ 09 9727159 or 027 3881488